My exposure to winemaking thus far has only been helping out during harvest. Long, enjoyable hours of carefully moving fruit and juice from one area to another. Cleaning, laughing, drinking, cleaning. The work was fast paced and often left me with more questions than answers. I had a focused snapshot of the winemaking process, but not the entire picture.

Working at Domaine Pouillon has allowed me to see the entire process–from pruning to vines breaking buds and eventually, to harvesting and fermenting. Here are some of the highlights from working at the winery from January to May, 2021:

Great wine begins in the vineyard

This is an old saying.. and one I had rolled my eyes at.. just a marketing term right? But now I appreciate how much work goes into the vineyard–basically all year, until the fruit is ready to be plucked. The healthier the fruit is, the easier it will be to transform into wine.

Since harvest is completed by winter, most of my hours have been spent in the vineyard. I was grateful for this, since it’s the area of winemaking that I’ve had the least experience with.

Winter vines are dormant, free of shoots, leaves and fruit. Thus, it’s a great time to make decisions about propagating, removing, or planting new vines. In one of the vineyards, we removed a few acres of vines that were malnourished or dead. This was accomplished by securing one end of a metal chain to the base of the vine and the other, to the bucket of a tractor. Then, liftoff! 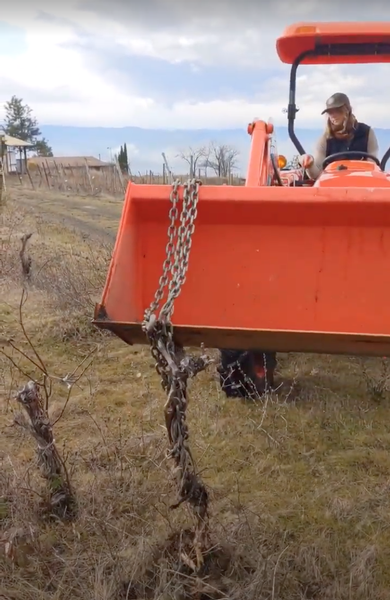 Assistant Winemaker Teddi Fuller operates the tractor to rip out the dead vines.

Once all the vines are out of the ground, then we can mix the area to get the soil breathing nicely. Next, we add organic compost to the ground and eventually, replant with cuttings (young vines) to hopefully produce some beautiful fruit in a few years.

On the estate vineyards, most of the vines are in good shape. However, there are the occasional ones that die or are damaged (frost damage can be one culprit). For the one-off’s, it’s inefficient to use a tractor, so we simply remove by hand and shovel. Sometimes there’s a young shoot from the base (a sucker) that we can re-train to the metal stake. For more on training vines, see below.

Pruning is one of the most important decisions that a vigneron must make throughout the year. Prune too aggressively, and you’ll be left with a meager fruit output. Prune too little and have too much fruit, diluted flavor as well as possible problems stemming from the lack of airflow in the canopy.

Additionally, how the vine is pruned will result in consequences not only this year, but the year after as well. I spent time pruning in Sonoma at Small Vines winery, but other than that I was starting with a blank slate. Alexis (owner of Domaine Pouillon) stressed the importance of balance — leaving the proper amount of buds on each vine and setting up proper spacing to maximize airflow without leaving gaps. Every vine is like a puzzle; where do I cut in order to maximize the chance for best possible grape quality?

Once vines are pruned, they need to be trained. Training vines involves securing the trunk to a post (usually made from metal or bamboo). One project we worked on involved replacing bamboo stakes with metal ones, as metal lasts longer and won’t be subject to corrosion and breaking like bamboo. Vines will naturally have a mind of their own and by training the base to an upright post, you are helping them produce shoots in the desired vertical direction.

Shoots are the current year’s growth, and what will birth the fruit. Shoots grow from canes, also known as last year’s shoots (cane pruning) or from the cordon trunks (spur pruning). Left unattended, shoots will grow wild, using their tendrils to attach themselves to anything they can. Some vineyard managers and winemakers actually leave vines to grow like this and it’s called Bush Vine — popular in places like Swartland in South Africa.

Assuming you’re not aiming for Bush Vines, then you’ll want to tie the cane or cordon down to the trellising wire. This is done for two reasons: 1) to encourage vertical growth of the shoots and 2) to prevent the arms of the vines from blowing all over in the wind. The Columbia Gorge is extremely windy and when the canes produce their shoots with leaves, the plant will act like a large sail in the wind; tying down the wood to the trellising wire will keep the vine steady in squall-like conditions.

Suckering on the vineyard

After the vines are in a good place for growth, we wait for budbreak. This is exciting to see the transition from dormant wood to new growth for the upcoming season. Hopes are high with these beautiful green beauties spurting out!

However, not all growth is desired. There’s a fixed supply of energy that the plant can produce, so you only want that to be focused in the right areas (up, into the shoots that are spaced properly). Shoots will grow all over the vine — the trunk, the base and parts not intended along the arms; these are called suckers. Suckering is pretty simple — just need to remove them with your hand. This will eliminate unnecessary energy being transferred to undesired locations and instead, focused into the intended areas of the vine.

Compared to storm of working a harvest, the Winter and Spring vineyard work has been a cool breeze; sipping my wine instead of gulping it down. Taking a minute to really understand the process and the amount of labor involved. Learning, learning, learning.

Appreciating the rewarding feeling of working with my hands with the sun at my back. Four months in and I am so happy; confident that I made the right decision to devote my full attention to our dream of winemaking. Often times during the day, I have a feeling–one that I never had while working at a desk–that in this very moment, this is exactly where I want to be and want to be doing.

stay in the know

Keep up to date on the latest wine releases, events, and promotions and get 10% off your next order.